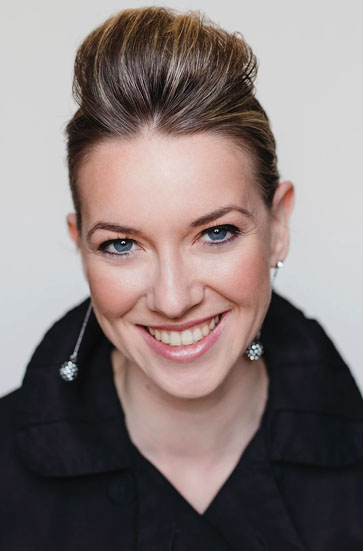 Katie began her musical journey as a child competing as a young pianist and on stage as part of the Langley Ukulele Ensemble. She studied piano and voice during her undergraduate degree, and is an alumna of Kwantlen Polytechnic University, and graduated with a Masters of Music in Opera Performance from the University of British Columbia in 2015.

In August 2013 Katie won first place in the vocal category at the Canadian National Music festival in Waterloo, Ontario, and in November she obtained a young artist’s encouragement award at the Metropolitan Opera Western Canadian District Auditions.

In the summer of 2014, Katie studied at the International Summer Academy at the Mozarteum in Salzburg, Austria, with soprano, Michele Crider and mezzo-soprano, Marjana Lipovsek.

While at the academy she obtained second prize in the program’s Richard Strauss Wettbewerb. In 2015 Katie won a concert engagement in Japan from the Jeunes Ambassadeurs

Lyriques Competition in Montréal. Katie was engaged as a young artist in residance at L’opéra de Montréal for the 2016/17 & 2017/18 seasons.

​Outside of the classical and operatic stage Katie sings Mariachi music, sings and plays piano bar music at various events and teaches voice, piano, and ukulele.